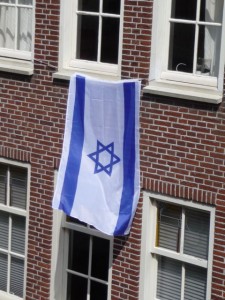 Some time ago, activist Gretta Duisenberg hung a Palestinian flag from her house in a posh district of Amsterdam. It didn’t go down well with the neighbours, who are mainly Jewish. In response, an enterprising TV journalist draped an enormous Israeli flag across the entire roof of the Duisenberg residence, which effectively became an occupied territory. Eventually, all the flags were removed at the insistence of Gretta’s husband Wim, who also happened to be president of the European Central Bank.

Now history is repeating itself in the street where I live. Someone from my block has hung a Palestinian from their balcony, which has been fluttered brightly for many weeks in the spring sunshine. Evidently it pissed one of my neighbours off mightily, and last Thursday night an Israeli flag suddenly emerged from a house on the opposite side of the street.

What would happen? Would this lead an escalation of hostilities?

No. The Palestinian flag promptly disappeared and has never been seen again!

They Don’t Eat Bunnies, Do They?