Just four days after the Queen’s Day attack, Queen Beatrix attended the annual Dutch Memorial Day ceremony in the centre of Amsterdam. Needless to say she was completely professional, as was the beefed-up security with police vans blocking all the major roads leading to the vicinity. 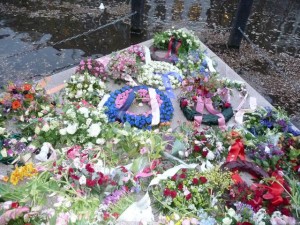 Later that evening I attended an event in memory of the victims of the gay and lesbian holocaust. Held at Amsterdam’s much-loved Homomonument, it was also a show of solidarity against the rising tide of homophobia not only worldwide but also in Holland. Under a gentle snow of fluttering elm seeds, there was music, speeches and the laying of wreathes. Finally everyone was invited to place their flowers, and my friend Lidi graciously shared a bouquet of red roses with me.

But what of the security? There was indeed a raised police presence. And that was just as well because I discovered an abandoned backpack. Having lived through the IRA bombing campaign in London, I know that you should never trust a lost bag. So I approached the nearest policeman, who refused to do anything about it because he had to wait for an important message on his earpiece! In other words, despite the risk of impending disaster, orders are orders! 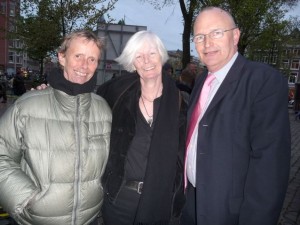