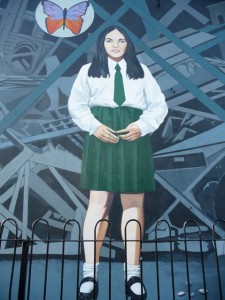 The girl in this mural is 14-year-old Annette McGavigan, who lived with her parents, four brothers and two sisters in Drumcliffe Avenue in the Bogside, a Catholic district of Derry (Northern Ireland). She loved music, art and playing with the local children. On 6 September 1971, Annette was shot in the head by a British soldier. No one has ever been charged with her murder and no investigation has been carried out.

Two weeks ago in Derry, I met her cousin, Kevin Hasson, who was one of the artists who painted this mural on the side of a Bogside apartment building. Kevin, who first honed his skills copying the graphics on Thin Lizzy covers, works with fellow muralists Tom and William Kelly. Collectively they are known as the Bogside Artists. All of them are locals and experienced the Troubles first hand. They were in the Bogside during Bloody Sunday when the Army shot dead 26 civilians. Kevin was a youngster out on the streets but was lucky. Tom and William’s father had served in the British military and knew that the arrival of the elite Parachute Regiment meant danger. He told his boys to say at home and they did as they were told.

The Bogside Artists have been working together for the last 15 years. What’s striking about their work is that, although the murals reflect the historical details of civil war in the Bogside, their themes are universal rather sectarian. Annette’s mural, for instance, is called the “Death of Innocence” and highlights the plight of the child victims of conflict everywhere.

Hopefully peace is here to stay in Northern Ireland. That’s why the Bogside Artists are now organising art workshops for the local kids, both Catholic and Protestant, where they can get to know and understand each other better.

A New Beast for My Domestic Menagerie…