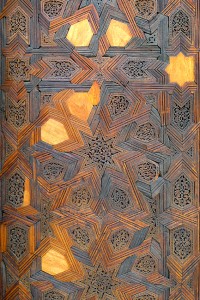 Divine geometry… with some missing bits. A door at a Fez madrassa, a religious college. © www.anniewrightphotography.com

The word madrasah derives from the triconsonantal Semitic root د-ر-س D-R-S ‘to learn, study’, through the wazn (form/stem) مفعل(ة)‎; mafʻal(ah), meaning “a place where something is done”. Therefore, madrasah literally means “a place where learning and studying take place”. The word is also present as a loanword with the same innocuous meaning in many Arabic-influenced languages, such as: Urdu, Bengali, Hindi, Persian, Turkish, Azeri, Kurdish, Indonesian, Malay and Bosnian / Croatian.[2] In the Arabic language, the word مدرسة madrasah simply means the same as school does in the English language, whether that is private, public or parochial school, as well as for any primary or secondary school whether Muslim, non-Muslim, or secular.[3] Unlike the use of the word school in British English, the word madrasah more closely resembles the term school in American English, in that it can refer to a university-level or post-graduate school as well as to a primary or secondary school. For example, in the Ottoman Empire during the Early Modern Period, madrasas had lower schools and specialised schools where the students became known as danişmends.[4] The usual Arabic word for a university, however, is جامعة (jāmiʻah). The Hebrew cognate midrasha also connotes the meaning of a place of learning; the related term midrash literally refers to study or learning, but has acquired mystical and religious connotations.

However, in English, the term madrasah usually refers to the specifically Islamic institutions. A typical Islamic school usually offers two courses of study: a ḥifẓ course teaching memorization of the Qur’an (the person who commits the entire Qurʼan to memory is called a ḥāfiẓ); and an ʻālim course leading the candidate to become an accepted scholar in the community. A regular curriculum includes courses in Arabic, tafsir (Qur’anic interpretation), sharīʻah (Islamic law), hadiths (recorded sayings and deeds of Muhammad), mantiq (logic), and Muslim history. In the Ottoman Empire, during the Early Modern Period, the study of hadiths was introduced by Süleyman I.[4] Depending on the educational demands, some madrasas also offer additional advanced courses in Arabic literature, English and other foreign languages, as well as science and world history. Ottoman madrasas along with religious teachings also taught “styles of writing, grammary, syntax, poetry, composition, natural sciences, political sciences, and etiquette.”[4]

People of all ages attend, and many often move on to becoming imams.The certificate of an ʻālim, for example, requires approximately twelve years of study.[citation needed] A good number of the ḥuffāẓ (plural of ḥāfiẓ) are the product of the madrasas. The madrasas also resemble colleges, where people take evening classes and reside in dormitories. An important function of the madrasas is to admit orphans and poor children in order to provide them with education and training. Madrasas may enroll female students; however, they study separately from the men.

I Am Therefore I Seek Beauty…