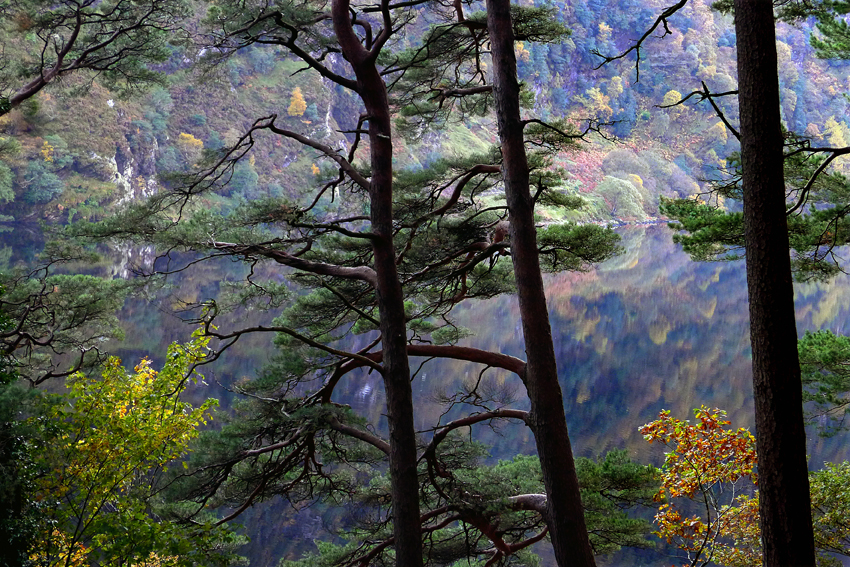 Glendalough revisited… I was there last week and now only in my mind’s eye. Sometimes it reminds me of a Chinese landscape painting.

Read more:
Painting during the Song Dynasty (960–1279) reached a new level of sophistication with further development of landscape painting; immeasurable distances were conveyed through the use of blurred outlines, mountain contours disappearing into the mist, and impressionistic treatment of natural phenomena. The shan shui style painting—”shan” meaning mountain, and “shui” meaning river—became prominent features in Chinese landscape art. The emphasis laid upon landscape painting in the Song period was grounded in Chinese philosophy; Taoism stressed that humans were but tiny specks amongst vast and greater cosmos, while Neo-Confucianist writers often pursued the discovery of patterns and principles that they believed caused all social and natural phenomena.[7] The painting of portraits and closely viewed objects like birds on branches were held in high esteem by the Song Chinese, landscape painting was paramount.[8] By the beginning of the Song Dynasty a distinctive landscape style had emerged.[9] Artists mastered the formula of creating intricate and realistic scenes placed in the foreground, while the background retained qualities of vast and infinite space. Distant mountain peaks rise out of high clouds and mist, while streaming rivers run from afar into the foreground.[10]

There was a significant difference in painting trends between the Northern Song period (960–1127) and Southern Song period (1127–1279). The paintings of Northern Song officials were influenced by their political ideals of bringing order to the world and tackling the largest issues affecting the whole of their society, hence their paintings often depicted huge, sweeping landscapes.[11] On the other hand, Southern Song officials were more interested in reforming society from the bottom up and on a much smaller scale, a method they believed had a better chance for eventual success.[11] Hence, their paintings often focused on smaller, visually closer, and more intimate scenes, while the background was often depicted as bereft of detail as a realm without substance or concern for the artist or viewer.[11] This change in attitude from one era to the next stemmed largely from the rising influence of Neo-Confucian philosophy. Adherents to Neo-Confucianism focused on reforming society from the bottom up, not the top down, which can be seen in their efforts to promote small private academies during the Southern Song instead of the large state-controlled academies seen in the Northern Song era.[12]