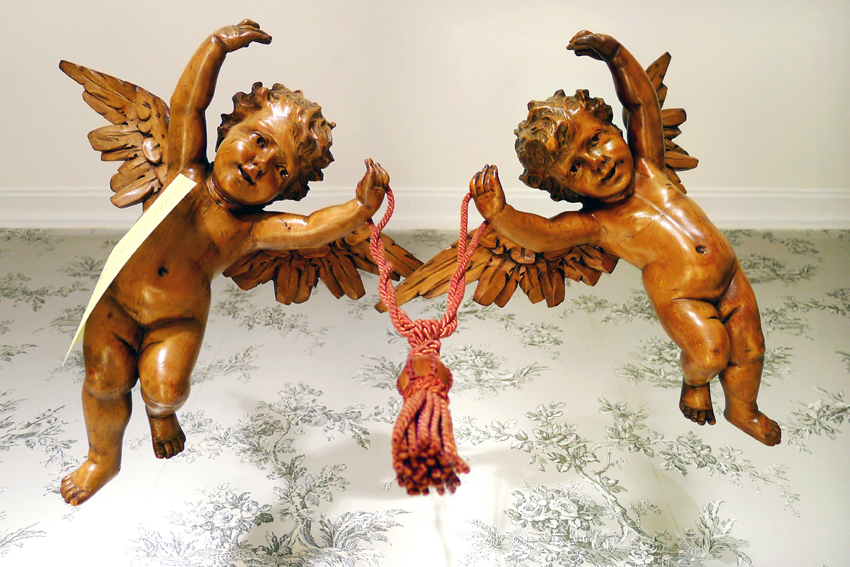 The Hebrew term cherubim is cognate with the Assyrian term karabu, Akkadian term kuribu, and Babylonian term karabu; the Assyrian term means ‘great, mighty’, but the Akkadian and Babylonian cognates mean ‘propitious, blessed’.[3][4] In some regions the Assyro-Babylonian term came to refer in particular to spirits which served the gods, in particular to the shedu (human-headed winged bulls);[4] the Assyrians sometimes referred to these as kirubu, a term grammatically related to karabu.[3] They were originally a version of the shedu, protective deities sometimes found as pairs of colossal statues either side of objects to be protected, such as doorways.[4][5] However, while the shedu were popular in Mesopotamia, archaeological remains from the Levant suggest that they were quite rare in the immediate vicinity of the Israelites.[5] The related Lammasu (human-headed winged lions—to which the sphinx is similar in appearance), on the other hand, were the most popular winged-creature in Phoenician art, and so scholars suspect that cherubim were originally a form of Lammasu.[5] In particular, in a scene reminiscent of Ezekiel’s dream, the Megiddo Ivories—ivory carvings found at Megiddo (which became a major Israelite city)—depict an unknown king being carried on his throne by hybrid winged-creatures.[6]

The Lammasu was originally depicted as having a king’s head, a bull’s body, and an eagle’s wings, but because of the artistic beauty of the wings, these rapidly became the most prominent part in imagery;[3] wings later came to be bestowed on men, thus forming the stereotypical image of an angel.[6] The griffin—a similar creature but with an eagle’s head rather than that of a king—has also been proposed as an origin, arising in Israelite culture as a result of Hittite usage of griffins (rather than being depicted as aggressive beasts, Hittite depictions show them seated calmly, as if guarding),[6] and some have proposed that griffin may be cognate to cherubim,[7] but Lammasu were significantly more important in Levantine culture, and thus more likely to be the origin.[3]

Early Semitic tradition conceived the cherubim as guardians devoid of human feelings whose duty was to represent the gods and guard sanctuaries from intruders. This conception is similar to an account found on Tablet 9 of the inscriptions found at Nimrud,[3] in which the cherubim, like the shedu, depicted storm deities, particularly the storm winds.[7] It has been suggested that the image of cherubim as storm winds explains why they are described as being the chariot of the LORD in Ezekiel’s visions, the Books of Samuel,[8] the parallel passages in the later Book of Chronicles,[9] and passages in the early Psalms:[3] “and he rode upon a cherub and did fly: and he was seen upon the wings of the wind.”