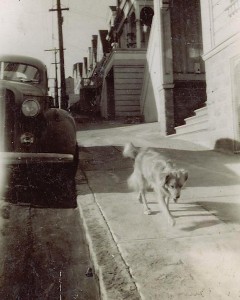 This is a dog who lived more than 70 years ago in San Francisco. His name was Rascal and he belonged to my grandfather’s family. In the picture, Rascal is on a doggy mission, following interesting scents of enquiry. Although the family had more than its fair share of troubles, Rascal is clearly a much-loved pet, and there are many photos of him looking sleek and well-fed.

I often think of Rascal and about how even when love goes wrong between humans, an animal can still be adored unconditionally.

This story has a curious postscript that happened some months ago when Rascal was very much on my mind. I was crossing a busy junction near Amsterdam’s Central Station when I saw Rascal or his identical relative. He was alone and dodging the rush hour. Terrified that he would be crushed beneath the traffic, I struggled to reach him but failed. Now far ahead of me, Rascal snaked between the tyres, playing canine Russian Roulette with infinite good fortune. Then suddenly I lost him. Taking his chances, he had vanished into the city and was gone.

The Divine Sarah at the Jewish Historical

The History of the Door