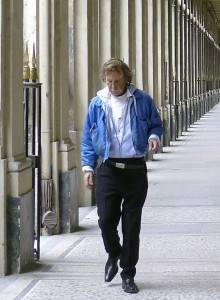 Fashion is full of casualties and lost souls. Think of John Galliano, whose vertiginous fall from grace continues with his current trial. Last week in Paris, I was haunted by another designer living in the shadow of what used to be. His name is Claude Montana.

Montana is now remembered as much for his private life as for his SM-inspired heyday of the mid-1980s. Never known as a ladies’ man, his marriage to model Wallis Franken ended when she took a swan dive out of a second-floor window amidst rumours that he had abused her. The next year Montana went bankrupt.

When I took this photo, Montana was padding silently around the Palais Royal, waving to young shop workers with a nimble swivel of the wrist. Later I spotted him dropping into cafés on Rue Saint Honoré in the hope of being recognised. On one occasion, he accosted a smartly-dressed man, who was clearly embarrassed.

Then it was my turn to encounter Montana and I was greeted by a whispered “Hallo”. Glancing up, I was overwhelmed by sadness. For he seemed like a homeless person, like a person with no real place to go.

The Gentle Art of Getting Lost

A Crack in Time?