Thursday morning at 6.45 am I was on the streets of Amsterdam and heading for the greatest street party in Europe: Queen’s Day, the day when the Dutch turn orange and take collective leave of their senses. It’s like your birthday and Christmas rolled into one. There are stalls everywhere so there are plenty of bargains to be had even if, like me, you’re a demanding customer looking for virgin goods at pre-loved prices. But the best thing is the relaxed atmosphere, where you find yourself talking to complete strangers and admiring the sheer creativity with which people celebrate the Netherlands’ much-loved Royal Family. Here, for instance, is Pino, looking every inch a regal pup. 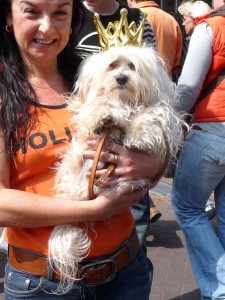 All that came to an abrupt end with the carnage in Apeldoorn, which millions saw live on TV.

Political assassination in Holland was once something that last happened hundreds of years ago with the killing of William the Silent in the late 16th century. But all that changed with the new millennium and the murders in quick succession of politician Pim Fortuyn and film-maker Theo van Gogh. Why? Why has this once relaxed and tolerant society become gripped by fear and paranoia?

And what of the famously accessible Dutch Royals? Will they become as remote as the House of Windsor? Will Queen’s Day lose its point and its popularity? The first hint will come next Monday evening when Queen Beatrix attends one of the most public events of the year: the WWII memorial ceremony in the heart of Amsterdam.