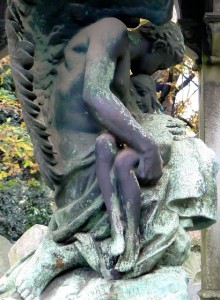 A monument to a little girl who died in the early 20th century. No doubt her parents were comforted by the thought that she was being borne heavenwards by an angelic being, but in these cynical times it looks more like she’s drugged and has fallen into the clutches of a paedophile with wings.