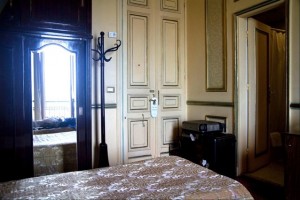 This was my room at the Hotel Metropole in Alexandria. The building used to be the Egyptian Ministry of Public Works where its most famous employee was the early 20th century poet Constantine Cavafy. Maybe this room was also his room. But even if it was not, Cavafy must have been here during his thirty year tenure as a civil servant.

It was him that I was thinking of when I took this photo, hoping that his ghost would put in an appearance. Later, as I traveled through the desert towards Abu Simbel, I found myself thinking of Cavafy’s wondrous poem Ithaca:

When you depart for Ithaca,
wish for the road to be long,
full of adventure, full of knowledge.

The Ghost of the Bridge