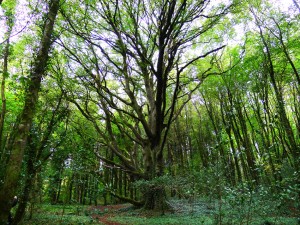 The Queen of Trees… towering over the forest surrounding Moore Hall in the Wild West of Ireland. ©www.anniewrightphotography.com

Moore Hall, or Moorehall, the house and estate of George Henry Moore and family, is situated to the south of the village Carnacon in the barony of Carra, County Mayo in a karst limestone landscape. The Moores were an aristocratic Irish family who built Moore Hall between 1792 and 1795. The first Moore of Moore Hall was George Moore, a name borne by many members of the family down the generations. The Moores were originally an English Protestant family but some became Catholic when John Moore married the Catholic Jane Lynch Athy of Galway, and when their son, George, married Katherine de Kilikelly (really Kelly), an Irish-Spanish Catholic, in 1765.[1][2]

The ruins of the Moore family’s large stately home, Moore Hall, lie on Muckloon Hill overlooking Lough Carra.[3] The house was designed by John Roberts, an architect from Waterford who also designed Tyrone House in Co. Galway, and Waterford Cathedral. Several members of the Moore family played major parts in the social, cultural and political history of Ireland from the end of the eighteenth century to the early twentieth century. The house was burned down in 1923 by anti-Treaty irregular forces during the Irish Civil War because Maurice Moore was viewed as pro-Treaty.