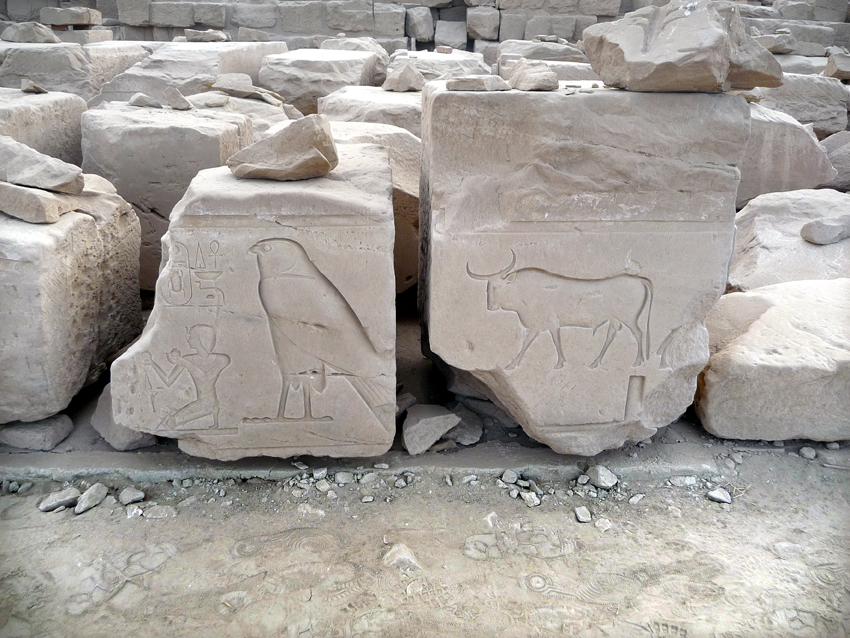 The Precinct of Mut is very ancient, being dedicated to an Earth and creation deity, but not yet restored. The original temple was destroyed and partially restored by Hatshepsut, although another pharaoh built around it in order to change the focus or orientation of the sacred area. Many portions of it may have been carried away for use in other buildings.

The key difference between Karnak and most of the other temples and sites in Egypt is the length of time over which it was developed and used. Construction of temples started in the Middle Kingdom and continued through to Ptolemaic times. Approximately thirty pharaohs contributed to the buildings, enabling it to reach a size, complexity, and diversity not seen elsewhere. Few of the individual features of Karnak are unique, but the size and number of features are overwhelming. The deities represented range from some of the earliest worshiped to those worshiped much later in the history of the Ancient Egyptian culture. Although destroyed, it also contained an early temple built by Amenhotep IV (Akhenaten), the pharaoh who later would celebrate a near monotheistic religion he established that prompted him to move his court and religious center away from Thebes. It also contains evidence of adaptations, using buildings of the Ancient Egyptians by later cultures for their own religious purposes.

The architraves on top of these columns are estimated to weigh 70 tons. These architraves may have been lifted to these heights using levers. This would be an extremely time-consuming process and also would require great balance to get to such great heights. A common alternative theory regarding how they were moved is that large ramps were constructed of sand, mud, brick or stone and that the stones were then towed up the ramps. If stone had been used for the ramps, they would have been able to use much less material. The top of the ramps presumably would have employed either wooden tracks or cobblestones for towing the megaliths.

There is an unfinished pillar in an out-of-the-way location that indicates how it would have been finished. Final carving was executed after the drums were put in place so that it was not damaged while being placed.[2][3] Several experiments moving megaliths with ancient technology were made at other locations – some of them are listed here.

In 2009 UCLA launched a website dedicated to virtual reality digital reconstructions of the Karnak complex and other resources.[4]