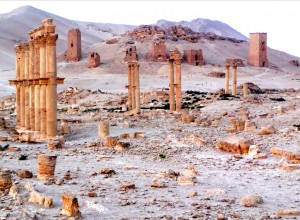 Daesh has destroyed three funerary towers in Palmyra that probably include ones in this photo, which was taken at dawn in 2009. Never forget the loss of countless human lives both in Syria and on the perilous journey to Europe. Start with Little Aylan, his brother and mother… ©www.anniewrightphotography.com

‘The very remoteness of the site has meant that Palmyra has always been shrouded in mystery and romance. In the 1870s Isabel Burton, the wife of the rakish British explorer Sir Richard Francis Burton, wrote of the need to engage a troop of Ottoman soldiers to escort them across the desert to Palmyra. So prevalent were attacks by marauding hordes of bedu that only the most determined and well-armed parties made it to admire the fabled ruins of this ancient oasis and trading city.

‘The writer Gertrude Bell, an archaeologist among many other things, reported similar problems in the first decade of the 20th century and it was only in the latter part of the century and, after a hiatus in the aftermath of 9/11, in the years running up to the current civil war, that Palmyra began to be visited by tourists in any significant number… Read more: http://www.theguardian.com/world/2015/aug/30/palmyra-isis-syria-history-influence-mourn