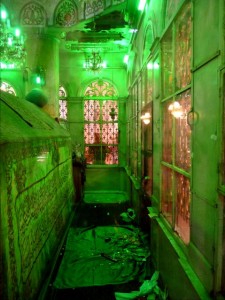 Even after being decapitated John the Baptist certainly managed to get around. Or at least his head did. It is rumoured to be located in places as varied as Rome, Antioch, Munich and even Halifax in Yorkshire. However, the people of the Umayyad Mosque in Damascus are quite certain that they have the real thing and have built it a shrine of emerald splendour.

The Umayyad Mosque also houses a niche where the head of Huseyn ibn Ali, grandson of the Prophet Muhammed, was displayed by the caliph who had him executed. According to Islamic texts, “the Heavens and the Earth wept only for two people: John the Baptist and Husayn ibn ‘Alī”.