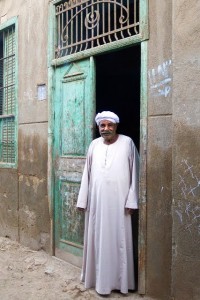 In January I went to a village in Egypt to photograph a clan of archeological excavators, who are famous for their honesty concerning the treasures they find. According to their strict code of honour, even the merest suggestion of grave robbing is punishable by absolute banishment. A recent suspect was a young boy, who was immediately shunned by the entire village. Knowing that all the people he had ever known would never speak to him again, the boy walked off into the desert and was never seen again.

Photo of one of the clan’s elders: © www.anniewrightphotography.com, Kift (Luxor)

The Blues and Greens of the Red Sea