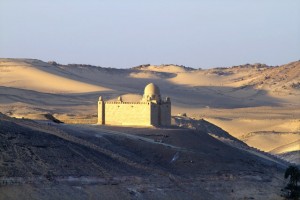 This twilight scene in Aswan looks romantic and is romantic. Nestling amidst the sands is the mausoleum of the third Aga Khan, who met the love of his life in Egypt. Her name was Yvette Labrousse, she was French and – as in all the best fairytales – she came from a humble background. Yet by the time she reached her thirties, the adventurous Mme Labrousse had moved to Cairo, converted to Islam and married the Aga Khan.

One day reality intervened and the Aga Khan died. Begum Om Habibeh (as she was now known as) missed her man terribly and adopted a daily ritual of placing a single red rose on his tomb, which earned her the nickname the “Red Rose”. When she was abroad, the ritual was performed by her gardener. When she died and was buried alongside her husband, it was taken over by the City of Aswan. Red Rose’s ritual – and all it represents – lives on to this very day.
© www.anniewrightphotography.com, Aswan, Egypt

The Triumph of Style Over Substance…

Lost in the Sands of Time