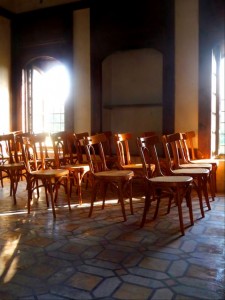 An empty lecture room in the lovely al-Azm Palace in Hama, Syria. It seems so serene, a place where wise people may contemplate subjects such as the perfect, exquisite void of the number zero that was discovered two-and-a-half thousand years ago by the Babylonian mathematicians in what is now Iraq.

The Palace has also seen more than its fair share of trouble, and was extensively damaged in 1982 when the Syrian military bombarded the city in an action against the Muslim Brotherhood, which resulted in possibly as many as 40,000 deaths.

A Warm Welcome in Damascus

Jesus of the Ciggies

Be A Photographic Beachcomber