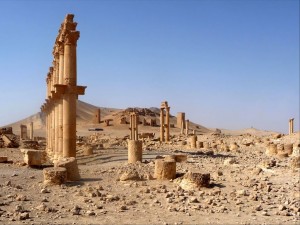 Once in the ancient city of Palmyra (Syria) there ruled a warrior queen called Zenobia, who rebelled against the Romans and captured lands as far to the west as Egypt and also in Asia Minor to the north. Now Palmyra – like the rest of Syria – is facing an uncertain future as the country descends slowly but surely into civil war.

The Ibn Tulun Mosque in Cairo

As the Sun Goes Down…