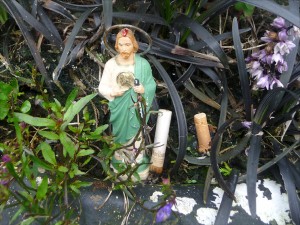 Jesus in the smoking section outside a pub in Ireland.

An Irish pub is an establishment licensed to serve alcoholic drinks for consumption on the premises. Irish pubs are to be found in cities throughout the world.

Until the arrival of supermarket and grocery chain stores in the country in the 1960s Irish pubs usually operated as a ‘Spirit grocery‘, combining the running of pub with a grocery, hardware or other ancillary business on the same premises (in some cases, publicans also acted as undertakers, and this unusual combination is still common today in the Republic of Ireland).[1][2]

Spirit groceries first appeared in the nineteenth century, when a growing temperance movement in Ireland forced publicans to diversify their businesses to compensate for declining spirit sales. With the arrival of increased competition in the retail sector, many pubs lost the retail end of their business and concentrated solely on the licensed trade. Many pubs in Ireland still resemble grocer’s shops of the mid nineteenth century, with the bar counter and rear shelving taking up the majority of the space in the main bar area, apparently leaving little room for customers. This seemingly counter-productive arrangement is a design artefact dating from earlier operation as a spirit grocery, and also accounts for the differing external appearance of British and Irish pubs. Spirit grocers in Northern Ireland were forced to choose between either the retail or the licensed trades upon the partition of Ireland in 1922, so this pub type can no longer be found in the North.